Comparative Advertising – What It Is & How To Use It

What is comparative advertising?

Have you seen Popeye’s ad where they mock Chick-fil-a’s national sandwich day blunder? In that ad, Popeye’s took a jab at its rival by simply saying that they care about their customers more than their competitor, Chick-fil-a. How? Because they’re open on Sunday whilst their competitor isn’t.

Comparative advertising has been around for decades in the modern era of advertising. It is an advertising strategy in which businesses compare themselves to their competitors. The goal is to show your target audience and prospective buyers that your product is better than the competition.

Essentially, comparative advertising allows you to tell your audience why they purchase from you instead of your competitors.

In saying that, comparative advertising is not always effective and can sometimes backfire on your brand image or worse, you can find yourself being sued by a competitor.

And so, it’s important to consult with your legal advisors before launching a comparative ad campaign to ensure you follow the advertising regulations of the country and platform you operate in.

However, when done right, comparative ads can be quite effective and catapult your sales to new levels.

How can you use comparative advertising?

When you create a comparative ad, you typically mention the name of the competitor but sometimes brands don’t mention the name. They focus on making it clear who they are talking about without mentioning names. That’s also another way of doing it.

So, what can you communicate in a comparative ad? There are various messaging types. You can focus on

There are many areas to focus on when doing a comparative ad but the key important factor is to have a powerful and convincing message.

In addition, there are no specific guidelines on how to create a comparative ad. It can be serious, funny, or anything in between. A lot of brands that create comparative ads hope their ads go viral on various social media platforms. But whether an ad goes viral or not, if it delivers an appealing message, it can generate the business outcomes you are looking for.

Samsung is notorious for trolling Apple in ads. In this ad, Samsung demonstrates how the iPhone is behind Samsung from a technology standpoint. They do a good job of portraying how some of the features the iPhone lacks create major inconveniences in various life situations.

Samsung does not hold back in its advertising and their main approach is showing how much more superior its Galaxy or Note phones compared to the iPhone. How many of these ads successfully turn iPhone users to Samsung? Market research data can shed light on that but the ads remain compelling to a large degree.

On November 1st, 2019, BMW USA released a graphic/content piece showing a Mercedes car covered by a BMW cover. And they captioned it with “Now every car can dress up as its favorite superhero”. 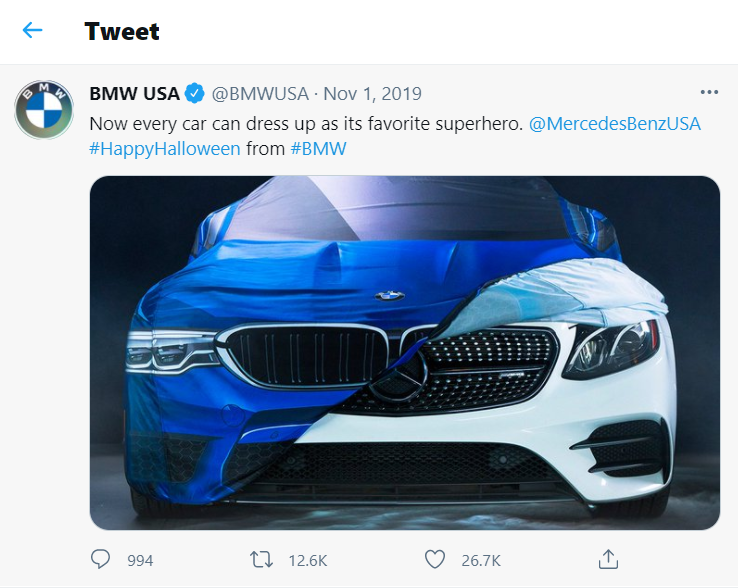 In my option, that’s an example of comparative marketing that didn’t quite nail it. The post is indeed creative. However, the message is simply, “Mercedes would rather be BMW” and the BMW is more superior. What they failed to convey, is logic or reasoning. In saying that, it is still a poke at their competitor and has generated a buzz.

Founder and Director of SAVV Digital, Rani has spent over 15 years working and consulting brands and business globally on how to improve and optimise their sales and marketing capabilities.

How can we help you grow? Get in touch!